Unveil the Mystery of the "Straight-Side Old Tibet" Cuni Coin

In 1985, China Mint Company issued a set of coins (one silver, the other copper-nickel) to commemorate the 20th anniversary of the founding of the Tibet Autonomous Region. These coins are known as "Old Tibet" among Chinese collectors, to distinguish them from coins for later celebrations. The mintage of the set is believed to be 3,000. In addition to this proof set, business strike cuni coins were also released, in much large quantities. 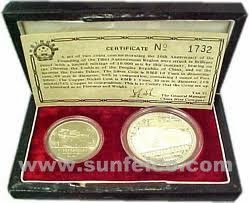 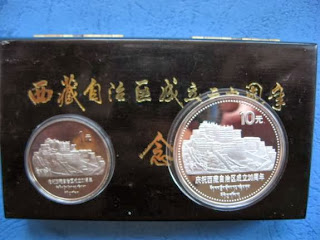 Five to six years ago, another "Old Tibet" cuni coin with the same design emerged on the market. It features a straight side, like early proof cuni coins from Chinese mints, but it does not have their mirror field. Nevertheless its strike quality is outstanding: no bag marks, easily graded to 68 or 69, which is rare among business strike cuni coins. The package is a plastic capsule within a soft pouch, much like precious metal coins from China Mint. Not knowing how to name it correctly, Chinese circulating coin collectors call it "Straight-Side Old Tibet". 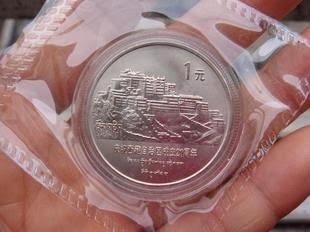 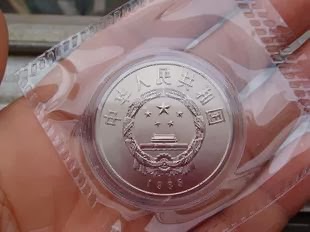 Comparison of the sides: 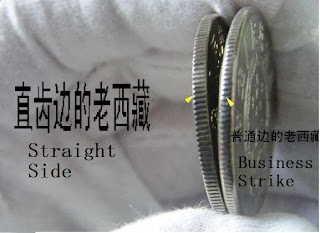 People were mystified by the origin and mintage of the "Straight-Side Old Tibet", as nobody knew for sure. Various proposals were bought up: trial strikes for the proof version, first strikes of the business strike BU version, and so on. Here are some discussions:

In May, 2013, a listing on eBay caught my attention when I was doing my daily browsing. It had a lengthy description:

KM#110. In 1985, the People's Republic of China issued a quantity of 1 Yuan coins commemorating the 20th anniversary of the founding of the Tibet Autonomous Region. While this was a commemorative coin, it was actually issued for circulation. About that time, a numismatic firm with offices in Kowloon, Hong Kong, and Tarzana, CA, USA, contracted with the China Mint for a two piece proof set of this coinage. The set was to be comprised of a 10 Yuan in proof silver and a 1 Yuan in proof copper-nickel. The two pieces in a deluxe lacquer case. The entire issue of the two piece proof sets were for that firm. When the sets arrived in Tarzana it was discovered that while the 10 Yuan was in beautiful proof silver, the matching 1 Yuan was a special circulation strike, something like a matte proof, and was only made in the quantity of proof sets in special uncirculated quality strike. However, this is not what the contract called for and the China mint then struck full proof 1 Yuans to replace coins in the proof set. All the sets were sold and in recent years, this two piece set has traded for as much as $500 and more. This left the special 1 Yuan coins, which were more in the nature of the specimen strike, and this is what we offer here in the original capsule. This very minuscule issue of this special 1 Yuan coin must be considered somewhat rare and very special.

After some research on the "Old Tibet" cuni coins, I contacted the seller and sent pictures of the sides of the business strike and "Straight-Side Old Tibet" to him, as the listing did not show the side of the coin. He confirmed it was the straight side type. To make sure, I bought the coin. When I examined it closely, there was no doubt it was the "Straight-Side Old Tibet", whose origin was thus unveiled!

I contacted the seller, who turned out to be none other than Mr. Richard Nelson of the Money Company of the World Inc., the distributor of the highly popular Xinjiang, Tibet and Zhantianyou coins. He wrote several long emails to discuss these coins. Here is the first one:

Hi, I hope you enjoy the coin when you receive it. There should be no speculation in China as to the history of the coin. It is quite simple. I am the President and the CEO of the Money Company of the World Inc. We operate under several divisions which are primarily the Money Company, Econo Coin Company, American National Mint, Silver State Token and at one time the Money Company Traders of Hong Kong. The last entity is not in business as we sold our real estate in Hong Kong and closed the Company prior to the reversion to China. At the same time we sold the Hong Kong International Coin Expo which we had founded and owned. During the course of the years of the HKICE we developed a relationship with the Chine Mint. So for several years the China Mint had a table at our coin show and for each of these years they issued a special commemorative Panda made for the show. During this time I would visit the mint once or twice a year in Beijing. After negotiations at that time, we obtained a contract with the Mint to produce exclusively for us 3 different issues. The first of these issues was a proof set version of the Tibet coin that was issued for circulation. We had no connection with the circulating coin, only the proof set version that was made for us. Next we obtained a contract for the same kind of situation. This was for the Sinkiang region coin. We had no connection with the circulating coin, only the proof set which was made strictly for us. There was also a very large silver railroad coin which was also made strictly for us. I think this explains the situation as clearly as possible. Unfortunately, we sold virtually all of these coins at that time. A number of years later when the price of these coins went so high, we were very sad that we had sold almost all of the coins. We had in our archives only a few of all the coins. Normally, I would not make such along explanation of the origin of these coins but as your interest seemed so sincere, I thought I would tell you the whole story.

I posted my findings on Chinese coin collection sites, and my posts caught the attention of the circulating guru Mr. Sun Keqin, who re-posted my findings in his blog. To answer the challenges raised by some doubtful readers, I forwarded all my email exchanges with Mr. Nelson to him with Mr. Nelson's approval. Mr. Sun concluded that the origin and the mintage of the coin were now clear.

There still remained a question why these "Straight-Side Old Tibet" cuni coins did not appear on the market much sooner. Mr. Nelson's reply was that they had been put away in the vault, as China Mint did not ask them back. A few years ago, he unloaded them all to one of his former employees, Mr. Ma Tak Wo in Hong Kong, who has been running the Ma Tak Wo Numismatic Co Ltd. This also accounted for the fact that "Straight-Side Old Tibet" on the China market was all imported from Hong Kong. But when I contacted Mr. Ma for his inventory, which Mr. Sun intended to buy up, he said it was all gone.

Before my discovery was made, the "Straight-Side Old Tibet" was selling around RMB1,500 ($250) on the Chinese retail market. The price has since risen to RMB2,000. But its upside is still enormous. With a mintage of 3,000, it should be valued on par with the proof cuni Old Tibet, which is selling around RMB6,000 ($1,000) and rising.

Observation: in addition to the precious metal coins from China, which were intended for overseas markets from day one, many early cuni coins (such as proof cuni coins) and medals of various materials also ended up outside China, like the "Straight-Edge Old Tibet" and proof "Great Wall" sets. US and European collectors still have cherries to pick if they can spot these rarities.

Disclosure: I myself own four "Straight-Side Old Tibet" cuni specimens.
Posted by Frank at 3:37 PM