Medals Made from Hand-Engraved Dies at Shanghai Mint

Before reducing machines (the most famous of which was the Javier reducing machine: https://medalblog.wordpress.com/tag/reducing-machine/) were invented, die makers engraved directly on the die blank of the size of the coin, to produce a negative image of the coin to be struck. It was slow, and it required years of experience to master the skill. (Even today, according to Zeng Chenghu, a hand-engraver needs at least five years of training before being able to work independently.) Introduction of the reducing machine eliminated this manual die making process, as artists could design a positive image on a much larger clay model, to be reduced to the actual coin size using the machine. Manual work on the various dies and hubs is still needed at the mint for die polishing and repair work. But the art of hand-engraving on coin sized dies is largely lost.

2. Shanghai Mint’s Effort to Carry on the Hand-Engraving Tradition 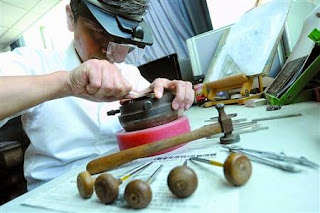 There are four steps in hand-engraving a steel die:

a. Transfer the design onto the die blank. The design needs to be transferred in a reserved image 1:1 onto the die blank, as the engraved device will be negative.
b. Preliminary engraving. The outlines of the image are compared against the design or the physical model. The highest point of the design is located, and a rough shape of the design is engraved, with differentiated layers.
c. Detailed engraving. Fine tuning of the engraved image is performed by working on the details of the design. Different layers are adjusted.
d. Overall check. When hand-engraving is complete, a complete checkup is performed on the die, to see whether the whole image is precise, whether the layers on the die are well defined and whether the overall effect is perfect. Further polishing may be needed.

Zeng Chenghu mentioned that normally hand-engraved dies are polished, to remove the sharp lines left by knives and/or chisels, so that the image will appear smooth. But at times, the artist would decide to leave part of the image or the entire image unpolished, for contrast or for special effect. In the following picture of the Songyue Temple medal, the tower itself is polished, while the hills and trees remain unpolished, showing sharp outlines: (Click to see a big picture) 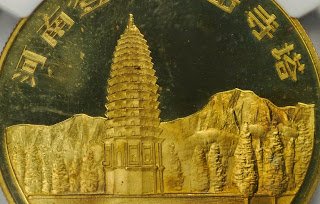 The Goldfish medals have the fish bodies polished, but not their tails. Also note the sharp lines on the water weed:(Click to see a big picture) 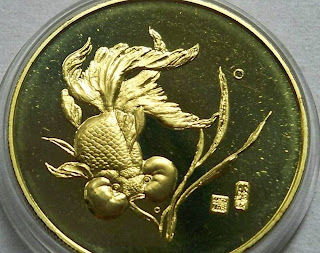 The orchid leaves in the picture below are obviously unpolished, too: (Click to see a big picture) 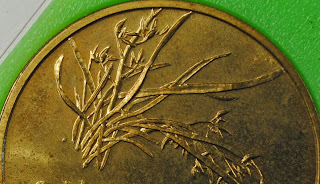 The hand-engraved die will be hardened and used as the master die, from which working hubs are made, and then working dies are made from the working hubs. As hand-engraved dies eliminate the use of the reducing machine (or its modern equivalent of a high definition scanner and precision mill), details are better preserved. Here is a comparison of the two processes:

Hand-engraving on steel dies is an extremely slow process. It was reported that Bai Wenjun, a hand engraver at Shanghai Mint, took almost a year  (on and off) to hand-engrave the dies of the Plum, Orchid, Bamboo and Chrysanthemum medal set: 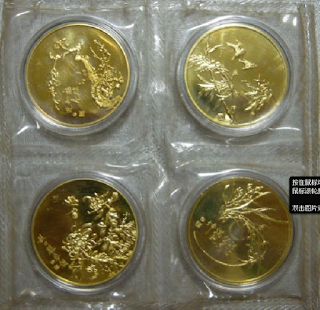 Zeng Chenghu admitted that it took him more than a year (on and off) to hand engrave the 4 sides on his Pagoda set: 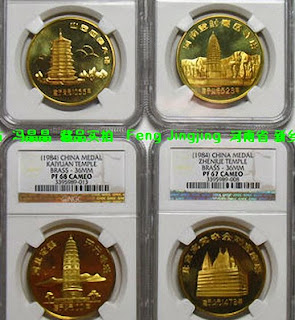 In recent years, pneumatic tools have been introduced into the hand-engraving process for preliminary engraving.

4. An Incomplete List of the Early Hand-Engraved Medals from Shanghai Mint

The peak time for hand-engraving came when Shanghai Mint just started commemorative coin and medal production, from 1979 to the mid 1980’s. As hand-engraving is slow, it was never used to produce coin dies which had a short deadline. Instead, most hand engraved dies were used to strike brass medals (and silver medals of the same design, such as Goldfish, Pagodas and Li Qingzhao). Some of these brass medals were restruck in the 1990’s, such as Pagodas, Goldfish, Plum, Orchid, Bamboo and Chrysanthemum and the Auspicious Palace Lantern series, but some were never restruck in brass, such as Cao Xueqin, Li Qingzhao and Shrimps and Crabs. In addition, gilt and silver plated versions were produced in the 1990's, which have less details as the gold/silver coating tends to cover them up.

Below is an incomplete list of early medals made from hand-engraved dies by Shanghai Mint. I did my best to locate the photos from my own collection and from the web.

a. Auspicious Palace Lantern (1980): all the following brass medals share the same reverse of a palace lantern. 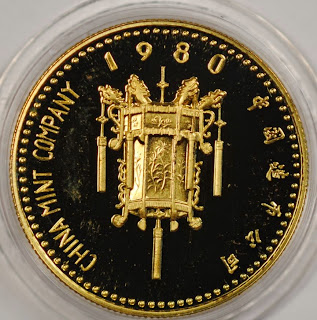 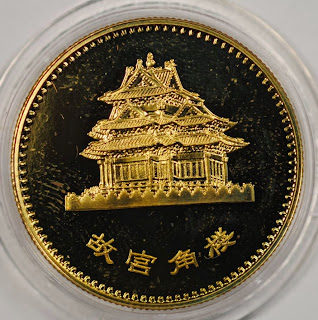 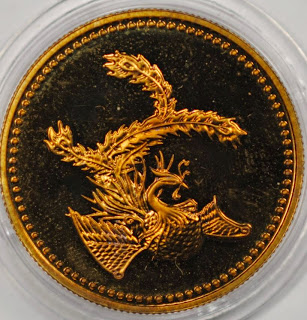 Dragon and Phoenix, by Ye Zhonghua 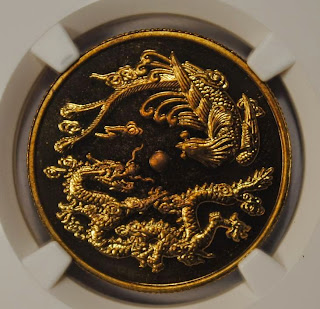 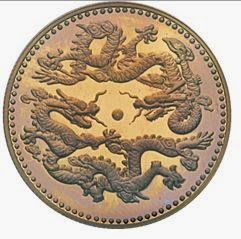 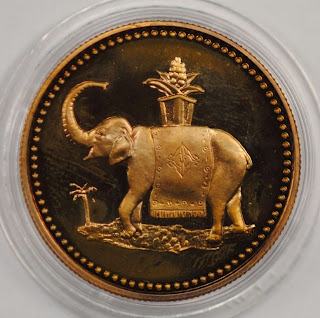 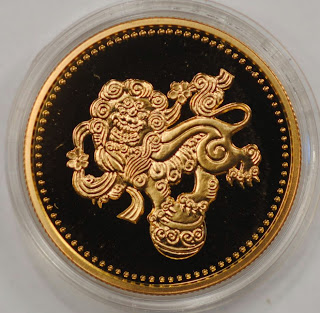 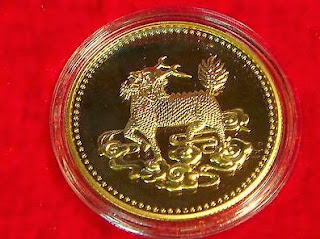 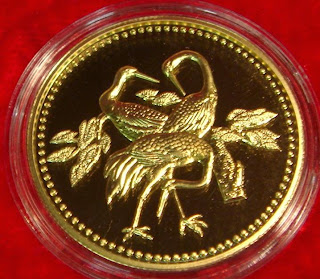 Note: those with the date "1980" are extremely hard to find. Medals without "1980" are restrikes, which are more readily available. This set also has a gilt version.

It is a mystery why so many hand-engravers contributed to the set. Probably it was a show of talent at the end of a hand-engraving training class?

b. Pagodas, by Zeng Chenghu 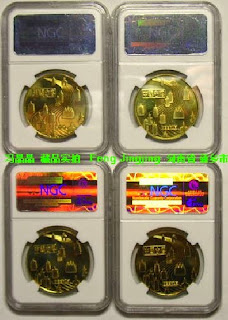 Note: the reverse is not hand-engraved, but etched. Brass original strikes are very few. Restrikes in the 1990's are more readily available. It has both gilt and silver plated restrikes. 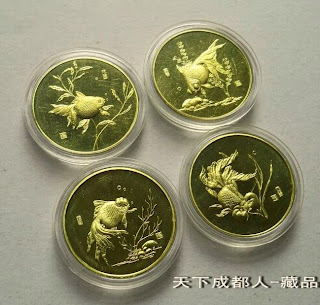 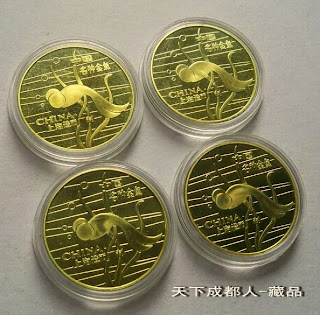 Note: the reverse is not hand-engraved, but etched. Brass original strikes are very few. Restrikes were said to be made. It has both gilt and silver plated restrike versions.

d. Flowers and the Moon, by Yi Shizhong 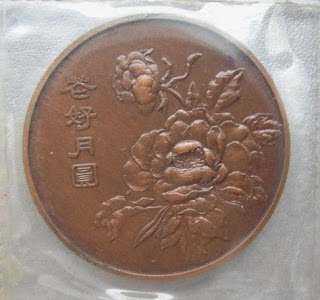 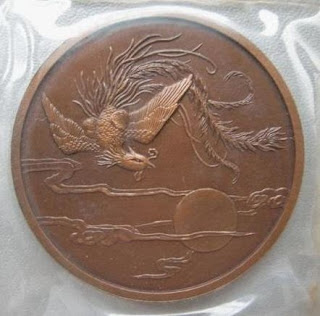 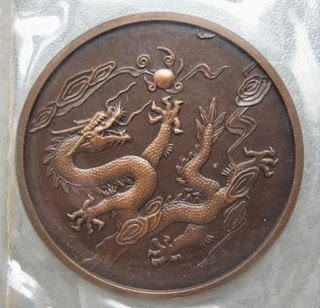 Note: This set has been reproduced in silver by Shanghai Mint recently in a difference size, by scanning and re-making of the dies, losing much of the original details and style. 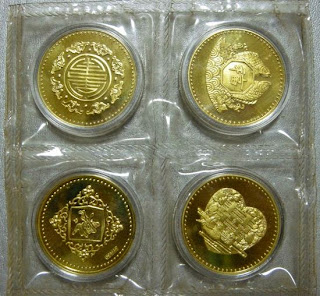 Note: There are restrikes of this set and a gilt version. The restrikes are pretty common. 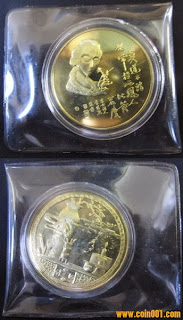 Note: This medal was restruck in stained and plated copper versions. 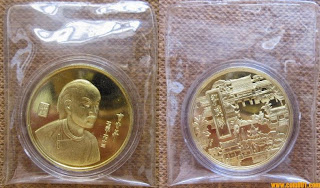 Note: This medal was restruck in stained and plated copper versions.

Note: This medal was restruck in gilt version.

i. Fortune and Marital Happiness, by Zeng Chenghu 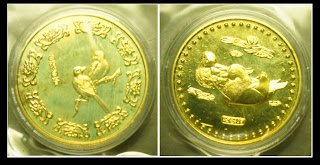 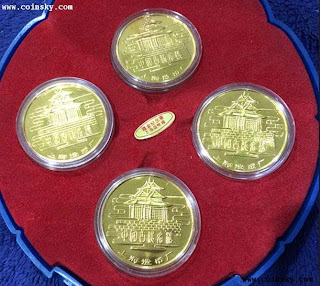 It is an exception here as this set was made in the 1990's. It is strange that this set only has a gilt version.

The following picture shows the details on part of Lion (Click to see the original size):